Those of you following along since the beginning of my Netherlands adventure will know that my overall goal here in the Low Countries was to settle with my Dutch-born wife for a time, while furthering my career in the wide world of whisky. After four months of continuous hoop jumping and back-flipping to pull things together, the great grinding gears of European bureaucracy have finally worn us down. Between a looming and severe rental housing shortage, a host of unforeseen and time consuming living permit requirements, and yes, even a bout of homesickness, we have made the tough decision to pack things up and make our return to beautiful Victoria, British Columbia.

Far from defeated by this outcome however, we instead remain blazing with the fire and enthusiasm to forge ahead with a new and exciting chapter in our lives; we are determined that our homecoming shall be a triumphant one. Similarly, we’ll look back at our time in this fantastic place with nothing but fondness and appreciation in our hearts. It’s been a hell of a ride, and to celebrate, we took a trip back to one of our favourite places, Huppel The Pub (featured in my first Netherlands dispatch back in early May), for a farewell dram. 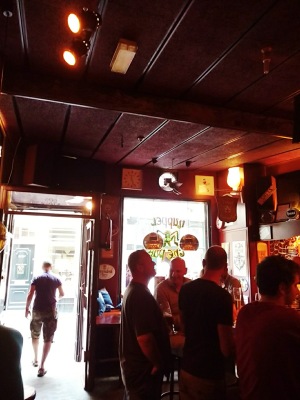 Deciding this could well be my last chance to do so for the foreseeable future, I decided to take the leap and try an honest-to-goodness Dutch whisky. My selection was a Millstone 10 year single malt. Produced at Zuidam Distillers in the town of Baarle-Nassau on the Dutch-Belgian border, the whisky was matured in new American Oak. I must say I was keenly impressed with the final result. The nose was dry and spicy up front, with some orange peels, vanilla pods and perhaps even a drizzle of maple syrup thrown in for good measure. The American Oak dominated the initial attack, lots of vanilla with a pinch of sawdust sprinkled on top, but overall there was some deftly balanced and nuanced notes shining through on the palate. More of those orange peels from the nose, along with a bit of anise and candied ginger soon joined the party. The finish was a touch on the nutty side, with some highly enjoyable lingering wild honey notes.

Mrs. Whiskymafia ordered herself an Arran 14, which due to being poured from a very nearly empty bottle, also earned her an on the house splash of 10 year old sherried cask-strength Arran to help make up the difference. A few rounds of complimentary bar snacks made their way around the room, including brie drizzled with honey, pâté, and slices of hard boiled egg, all of which was served atop fresh bread. After washing the whole lot down with some fine local ales we called it a night and made our exit.

Tomorrow morning we hop a flight back to Canada, each of us carrying home a lifetime’s worth of new friendships, connections, experiences and memories that I for one wouldn’t trade for the world. Dank je wel Nederland, wij houden van jou.

You can take a look back through each of the exciting chapters in my Netherlands saga below: